Display in one page

I often get various questions at the forum for how to use the program and how to configure it for various tasks. Sometimes the particular task is so complex and so specialized that the batch methods supplied with Advanced Renamer cannot help the user. This is why I added JavaScript support to the program and in the next paragraphs I will show you how it works. 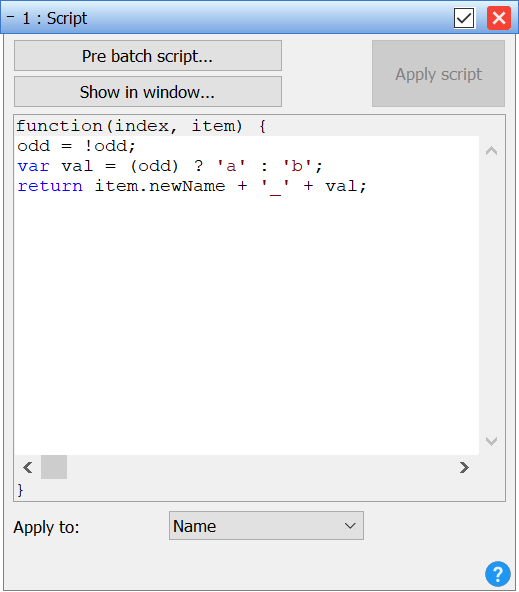 First add the files to Advanced Renamer. Then add the Script method to the method panel. Make sure this is the only method in the panel. In the script editor we can create the script needed for producing the new filenames. The script is executed once for each item in the list. The input parameter item contains the item from the list and its many properties. Typing item and hitting dot will show a list of properties on the item object.

Now for the actual item script. In the script we will use the global variable named odd setup in the pre batch script, and use it to insert either A or B into the filename. Insert this script into the editor:

Notice how the last line is the same but the two first lines for calculating the str variable has changed. This script will by using the index input parameter, produce the exact same result as the previous script.

So what else can we do? By using the properties of the item object we can access all information about the particular item available to the Advanced Renamer batch runner. If we also want to add the image dimensions to the filename in the script we can use a script like this (assuming we are renaming image files):

Any tag available to the program is also available in a script by using the parseTags methods of the app global object. To add an incrementing number after the base name use this script:

The parseTags method will actually take a string containing both normal characters and tags, just like the New Name method. The rule of thumb here is, if it works with New Name method it will also work with app.parseTags.